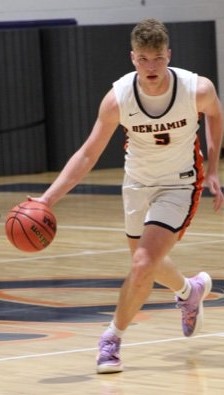 You’re not going to miss 2023 Gavin Aydelotte.  The 6-foot-11, 235-pound center/power forward is a star athlete at The Benjamin School in Palm Beach Gardens.

Aydelotte is likely the biggest presence across Palm Beach County. Let’s face it, you’re not finding near 7-footers walking around your local Costco.

“I started playing basketball in the 5th grade for fun, and began to take it more serious around 7th grade,” said Aydelotte.

It appears the hard work has been paying off.

Aydelotte averaged 16.7 points, 7.8 rebounds and 1.7 blocks per game while shooting 55 percent from the field as a junior. Moreover, he scored 20 or more points in eight contests and recorded six double-doubles. Aydelotte shot at least 58 percent from the floor in each game he scored at least 20 points. His finish and efficiency have improved over the course of his high school career.

More on Aydelotte & his accomplishments

Aydelotte posted a season-high 31 points and 13 rebounds while shooting 71 percent from the floor against Jensen Beach. He also tied a season-high with five rejections. In addition, he scored 25 points and grabbed 11 boards while shooting 50 percent from the field against 27-3 North Broward Prep. Against Wellington (22-7), Aydelotte scored 23 points on 10-of-12 (83 percent) shooting from the field. He helped the Buccaneers to its first district title in 10 seasons. Aydelotte was named 1st Team All-County by the Palm Beach Post. He was also the Sun Sentinel’s 5A-1A Player of the Year.

Aydelotte also featured a bit of a stretch game. He went 13-of-42 (31 percent) from deep. Aydelotte knocked down a season-high three 3-pointers against North Broward Prep and made at least one in nine games overall.

“I’ve been working a lot to improve my skill work, and I feel that my footwork and touch as well as my shooting are probably my main strengths,” said Aydelotte. “I’m looking to improve my ball-handling capabilities and being able to create shots myself, as well as my athleticism and explosiveness.

Overall, Aydelotte has appeared in 67 career games. His subsequent experience and high-level upside should have colleges on notice. Aydelotte also holds a 4.1 GPA in the classroom. You can view his twitter by clicking here. He runs with Team Judah Nation on the circuit.

“My main goals are to win a state championship and continue to play in college at a high level,” said Aydelotte.

You definitely won’t be missing him now. Aydelotte’s bright future is a can’t miss.