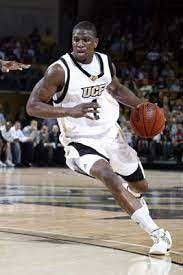 Inducted into UCF Athletics Hall of Fame, Jermaine Taylor was arguable the greatest UCF Knights basketball player ever to take to the floor.  A local kid from Tavares he was a box office hit every time he hit the court.  As then head coach Kirk Speraw stated “Jermaine was one of the most exciting, skilled, and talented players to ever put on a UCF uniform.  Jermaine was not only an outstanding player, but was a tremendous ambassador for our program and University.”

Jermaine scored 1,979 points during his UCF career which is the most in Division 1 era at UCF. He was named Third Team All-American and won the Conference USA Player of the Year award as a senior in 2009.  He averaged 26.2 points which was third best in the nation, behind NBA Steph Curry at the time.  He set a Conference USA single season record with 466 total points and 29.1 ppg in conference play.  Jermaine scored a school-record 812 points during his senior season and shot 48% form the floor including 37.6& from three point range.

He became the highest NBA draft pick in UCF history when he was selected with the 32nd overall pic in the 2009 NBA draft by the Washington Wizards who shortly traded him to the Houston Rockets.  Jermaine completed a few years in the league then played in the D-League and all over the world over the next few years.  Most recently he had been playing in the Big3 league up until he was injured.

Jermaine is now one of our go-to resources at mygotgame when it comes to recruiting college bound athletes.